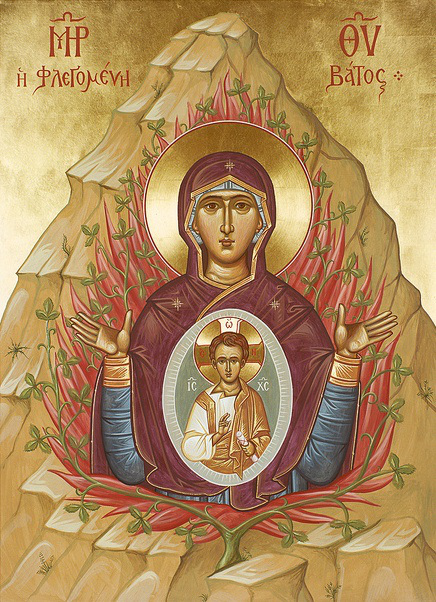 聖母安息日講道：如同聖母，孕育基督 Dormition Sermon: Have Jesus inside You as Holy Mother

The Holy Mother- How Do We Stand?

The Gospel of Matthew 17:14-23  At that time, a man came up to Him and kneeling before Him said, “Lord, have mercy on my son, for he is an epileptic and he suffers terribly; for often he falls into the fire, and often into the water. And I brought him to Your disciples, and they could not heal him.” And Jesus answered, “O faithless and perverse generation, how long am I to be with you? How long am I to bear with you? Bring him here to me.” And Jesus rebuked him, and the demon came out of him, and the boy was cured instantly. Then the disciples came to Jesus privately and said, “Why could we not cast it out?” He said to them, “Because of your little faith. For truly I say to you, if you have faith as a grain of mustard seed, you will say to this mountain, ‘Move hence to yonder place,’ and it will move; and nothing will be impossible to you. But this kind never comes out except by prayer and fasting.” As they were gathering in Galilee, Jesus said to them, “The Son of man is to be delivered into the hands of men, and they will kill Him, and He will be raised on the third day.”

St. Paul’s First Letter to the Corinthians 4:9-16 BRETHREN, God has exhibited us apostles as last of all, like men sentenced to death; because we have become a spectacle to the world, to angels and to men. We are fools for Christ’s sake, but you are wise in Christ. We are weak, but you are strong. You are held in honor, but we in disrepute. To the present hour we hunger and thirst, we are ill-clad and buffeted and homeless, and we labor, working with our own hands. When reviled, we bless; when persecuted, we endure; when slandered, we try to conciliate; we have become, and are now, as the refuse of the world, the off-scouring of all things. I do not write this to make you ashamed, but to admonish you as my beloved children. For though you have countless guides in Christ, you do not have many fathers. For I became your father in Christ Jesus through the gospel. I urge you, then, be imitators of me.

Because God, as the Bible is very clear, created the world in order to finally incarnate and become present, not only as He is present everywhere, but present as a human being. But he could not become a human being by force; he needed to find a human being so good, so holy that would be proper for Him. What was impossible to find in Paradise: He found on this earth, the Holy Mother.

But we must understand also that the Holy Mother was prefigured by all of these symbols in the Bible, like the box on the altar in the New Testament, which contained the Ten Commandments. This box was the symbol was symbol of another box, which is the womb of the Holy Mother that would have the Logos, not just the written word, but the living word of God. All of the prophets speak about the Holy Mother. In the famous song of the vespers on Tone Five, you will see the deep symbolic meaning of the Jews passing through the Red Sea. And John of Damascus, who wrote this, said that it was a very deep mystery of the Holy Mother, as the sea opened and the people of God passed by the same way, her womb opened and so in a mysterious way, the Son of God passed from her without breaking her virginity.

The Holy Mother was a virgin, as you see from the symbol of the Cross [pointing to the crosses on her robe in the icon on the side of the altar], was a virgin before giving birth, during giving birth and after she had given birth. It is a very sad thing, a pity and a shame also, that there are Protestants who refuse to refer to the mother of God, the Theotokos. It is ignorance and heresy because if what came out Mary was not God, then how could Jesus be God and why would we worship him as God. It is heresy because it is condemned by the Third and the Fourth Ecumenical Council, so from this point of view, those people are heretics. And also because calling Mary the Mother of God, we explain why we worship the baby Jesus, and when he grew up, and forever.

As we say after the consecration in the liturgy, we do the liturgy for all the universe, for all the world, but all the saints are happy because we do it for them. And we say especially for the Holy Mother, and then we sing the song for the Holy Mother. And we say “more honorable than the cherubim and higher than the seraphim.” Why is Mary higher than the angels, who are so close to God? It is because Mary loved God in such a deep way that nobody else ever loved God so much. As Gregory Palamas says, when Mary entered the Temple of Solomon when she was three years old, she found a new way to love God totally, by all her mind, by all her body, by all her existence. And why is she more than the angels? It is because her womb became the place and her blood became the body of the Son of God. From this point of view, as the Church sings to her, she is wider than the heavens because the heavens are not enough to enclose God, but God was in her womb. This is why she is called wider than the heavens.

Nobody loved Jesus more than her. And Jesus loved her more than any other human creature. On the cross, He showed to us a new way by speaking in his pain to John to take care of his mother. This shows the ignorance of Protestants do not respect the Holy Mother and who say that there were other children since if there had been other children then there would be no need for Him to ask John to take care of her. It was not James, the so-called brother of Jesus Christ, because in the Jewish language there is no word for cousin, as in Chinese there are so many terms for relatives. If he had been Jesus’ brother than why would Jesus humiliated him by asking somebody else to take care of his mother? It is accepting saying to John, and He is saying to us also, that she is our mother. Remember this, that we have a mother, the Holy Mother.

When she was about fifty years old, the tradition of the Church has given us many sermons from the first Fathers of the Church, Cyril of Jerusalem and many others from the Third Century, about her death. So she died, but after three days when they opened the grave they did not find anything. So although this is not a dogma of the Church, but it is a very strong belief, and you see in the long prayers and the big celebration that we have for this day, we are sure that Jesus could not allow, could not stand for the body that had given birth to him to be destroyed in the grave. So this is why we sing that “You were translated to life,” because you are the mother of life, because Jesus Christ is life. And this is what we celebrated on the fifteenth and we will continue to celebrate for one week. 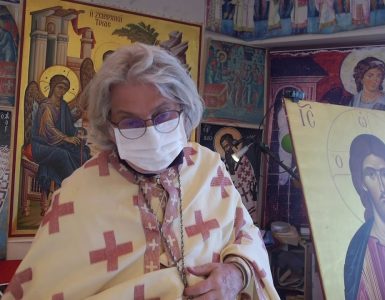 「天人合一」的體驗 On the experience of Theosis by John Romanides